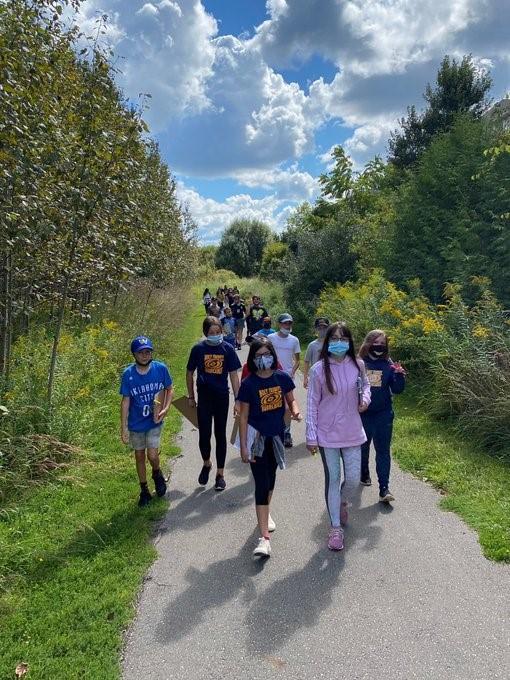 Grade 6 students at Holy Trinity Catholic School are learning about biodiversity through a Nature Bingo in their very own neighbourhood.

Each year the class visits the Guelph Lake Nature Centre to explore outdoor education fairly early in the school year, however, due to health and safety guidelines this isn’t taking place at this time. Instead, teachers Rebecca Newell and Ashley Karl got a little creative and started Nature Bingo.

“The season lends itself to many discussions around biodiversity.  We begin by introducing the 3 main types of biodiversity:  ecosystem, species and genetic.  Because we are unable to go to Guelph Lake, the Biodiversity Bingo was something I did last year, to get students outside with the purpose of looking at and searching for the biodiversity all around them,” shared Newell.

Some of the "Look fors" in Nature Bingo include items such as white flowers, an insect with 8 legs, bird hopping on ground, and a leaf bigger than your hand. The students take a clipboard, highlighter and sheet with them, and they were simply challenged to find as many of the items as possible during the nature walk.

“It was neat walking through the trails, hearing them yell, ‘Bingo!’.  Once they found a line, I encouraged them to find all of the items - and most of them did,” said Newell. “When we got back to the classroom, we discussed the difference between the biodiversity found along the sidewalk vs. the trails.  We then talked about how the nature trails are rich in living things because of the water and plants, and not much biodiversity was found on the sidewalk because of human activity.”

Newell and Karl have been working together for the past 10 years at Wellington Catholic, seven of which have been at Holy Trinity. While they haven’t been able to visit the Guelph Lake Nature Centre this year, the Nature Bingo has allowed the students to embrace nature and create connections to what they are experiencing with their own eyes.

“The more connected they are to nature, the more they will appreciate it. In fact, we saw this play out right away as they noted that they were disgusted by the amount of litter they found in their own neighbourhoods,” explained Karl. “​We found that the response from the students was very positive. After the first BINGO walk, they asked to go on another one and so they were quite excited when we said we were going on the ‘trash’ walk. ​They were very engaged on both of the walk.”

Since outdoor education is encouraged, especially with protocols in place, the pair will be continuing with guided walks connected to the mathematics curriculum, by exploring large numbers - reading numbers in the millions, place value, developing an understanding of numbers by looking at standard form vs. expanded form in the neighbourhood.

“We went on another walk through the neighbourhood with a different purpose, students had to find the amount of garbage along the streets and tally up what they found - cigarette butts, plastic water bottles, food wrappers, etc.,” shared Newell. “Then, when we got back to the classroom, we discussed how the garbage found along the streets can be representative of that found in the ocean.  After reading the large numbers as a class, students learned about the Great Pacific Garbage Patch, and how this negatively affects the biodiversity found within the ocean ecosystem.”

Newell and Karl will be continuing on with outdoor education in their classroom as long as weather permits.