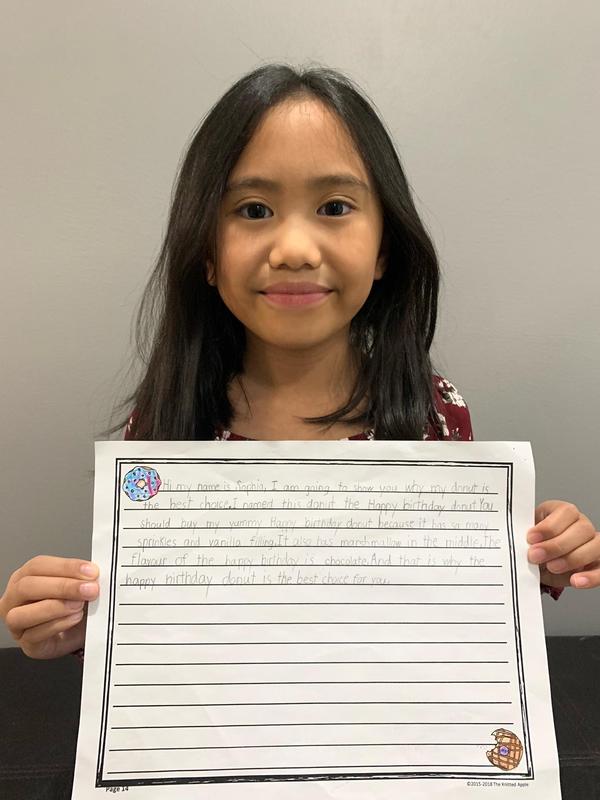 The winning feature flavour, ‘Happy Birthday Donut’, was created by Sophia, a grade 2 student at St. Patrick and will be sold at Lady Glaze as the ‘Holy Patriot’ as a tribute to both schools who participated. The doughnut is chocolate with vanilla filling, sprinkles and a marshmallow in the middle.

Grade 2 students at Holy Trinity Catholic School and St. Patrick Catholic Elementary School faced off for the chance to have their unique doughnut flavour featured for sale at Lady Glaze Doughnuts in Guelph this Thursday, February 4.

The winning feature flavour, ‘Happy Birthday Donut’, was created by Sophia, a grade 2 student at St. Patrick and will be sold at Lady Glaze as the ‘Holy Patriot’ as a tribute to both schools who participated. The doughnut is chocolate with vanilla filling, sprinkles and a marshmallow in the middle.

Having done a similar project last year as teaching partners and seeing how much fun the students had creating their own doughnut flavour – Ms. Farwell and Ms. Lannan thought it would be a great idea to take it to the next step and reach out to a local doughnut shop to see if they would be interested in participating.

“Ms. Lannan and I decided that this project would be a fun way to get students motivated online this year. We are trying to be creative and engaging so the students are having fun!” explained Ms. Farwell. “It was Ms. Lannan’s idea to reach out to Lady Glaze to see if they would be involved.”

They were thrilled when Lady Glaze kindly offered to make and feature the winner for the day.

“This is the first time I’ve had the community involved in a class project. The idea came so naturally and has been an amazing experience for everyone,” said Ms. Lannan. “Personally, I love how Lady Glaze is local, fresh, very creative and inclusive of the vegan community as well, so I thought it was so fitting that we reach out to see if they could help make our students’ online learning exciting.”

With the persuasive writing project reward sweetened, the teachers devised a plan to have each class put forward their top three donut choices from the student’s creations.

“We read the top three in each class over the phone to each other and narrowed it down to one from each class,” said Ms. Farwell. “We then had a hard time deciding, so we asked Lady Glaze to choose between the two.”

While Sophia’s ‘Happy Birthday Donut’ was ultimately chosen to be featured, the journey to choosing the winner was fun for everyone involved.

“It has been so hard for everyone being home and having a fun project like this was so exciting for the kids,” said Ms. Lannan. “They loved being creative and not only had to write about their doughnut, but also had to draw a picture with detail and labels. The kids did an incredible job and the engagement online was fantastic. The kids all shared about their doughnut orally on Teams as well! The top doughnut in my class was called ‘Rainbow Cream Dream’ and was a rainbow doughnut with bright sprinkles, chocolate cream inside and is soft and sweet. Every student in both classes took part and thoroughly enjoyed it.”

“We had many wonderful creations. I even had a student whose parents bought them all the items he included in his donut and he made it this weekend,” added Ms. Farwell. “He showed us this morning online. It was super cute. Another student named their donut ‘The Unicorn Horn Donut.’ It has a blue glaze on it with cotton candy in the middle and is shaped like a unicorn. Another child created one called ‘The Bubble Gum Sweet Cake Donut’. He said that the whole store's mouth would be watering from it.”

In addition to featuring the doughnut, Lady Glaze will also be welcoming the students in for a field trip to the store on Thursday – virtually of course.

“They also graciously offered to do a virtual field trip with our classes, showing our students how doughnuts are made,” said Ms. Lannan. “It has been a project to remember, that’s for sure!”

If you’re looking for a tasty treat, we highly recommend you make your way down to Lady Glaze Doughnuts on Thursday to try Sophia’s ‘Holy Patriot’! They are open from 9 a.m. - 6 p.m. and are located at 46 Quebec St, Guelph.